Skip to content
Home2020January
Rotary in Amersham invite you to –  ‘ An Evening with Adam Henson’ on Saturday 28th March 2020 at The King’s Church, Raans Road, Amersham, HP6 6LX at 7.30 pm.
Adam was born into a farming family where he gained experience with animals and farming.
Adam started in television in 2001 when he was chosen from 3,500 applicants to be a presenter and has since put his farming knowledge to good use broadcasting on a wide range of programmes for both radio and TV.

Tickets cost £20 and are available from Waterstones Bookshop Sycamore Road, Amersham or for a small fee

Proceeds will go to local charities supported by Rotary in Amersham.

Carrol Morris, who owns Carrols Hardware Shop in Hill Avenue, celebrates the longest “One Woman” business in the Town on the 1st February 2020.

She claims that she is the longest “One Woman” business in the Town, owning the store she has personally opened almost every morning, 365 days a year at around 7.30am since 1985, including Christmas Day.  She rarely takes a day off work!  She employs a small staff to help her run the store, which has only ever closed one day in the mid 90’s when thieves broke into her van and stole her bag which contained the shop keys.

The shop sells a huge range of everyday items and one can often find that one small thing you’ve been looking for.  Individual small items can be purchased rather than multi-packs as is often the case in the larger stores.  She says, “we can give the personal help and advice people are frequently looking for”.

During her time in business she has been nominated for various business awards and the most recent being in 2016 when she won the Amersham Town Council Business of the Year Award.

A visit to ‘Carols’ will be well “worthwhile” especially during the coming month of February where many extra promotional items will be on offer. 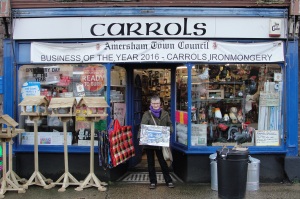